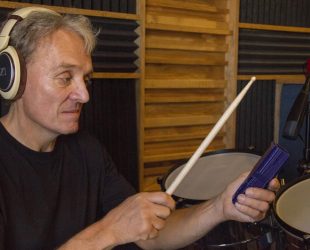 In April 1997 a Modern Drummer Article written by Rich Watson said.“Daniel’s drumming is highly trance- (and dance-) inducing. While other drummers jump on the the world music band wagon.
Jimmy Daniel can say — literally and from the heart — “been there, done that.”

Few have worked as hard and experimented as much with global styles than veteran session drummer Jimmy Daniel. A native of Indiana, Daniel has been exploring the world of sticks and skins since he was 12-years-old playing his first drum kit at local country-western gigs behind bee-hive-toting singers and empty beer bottles. Growing up listening to “feeling” music such as Heavy-duty Blues and Country Western, Jimmy learned to play by feeling the music he heard.
By the age of 17, A friend told him about an open call for drummers for a Rock’n’Roll singer out of Seymour, Indiana named John Mellencamp. “John wasn’t interested in auditioning me at first because I was so young, but my friend convinced him to give me a shot. One morning, Mellencamp called me and said. if you want to try out, you better get over her now. I freaked out and was got there in a heartbeat.” To his own surprise, Daniel blew everyone away and was hired on the spot.
With his first real opportunity as a serious musician beckoning, he was on his way….
Jimmy lived with Mellencamp’s band for two years in a farmhouse in Indiana, rehearsing and performing around the region. During this period a buzz was churning about John and soon the band was invited to New York City to cut a demo. It was an exciting time,topped-off by Daniel’s first taste of the thriving music scene in the Big Apple. After touring and recording with Mellencamp, Daniel decided that New York is where he needed to be. But deep down he knew he needed to fine tune his musical skills.
Taking advice from several professional musicians,the now 21-year-old Daniel left John’s band and enrolled at the Berklee College of Music, in Boston.
It was during these years that Daniel first explored world music elements. He often played with students from Trinidad to Africa,and became intrigued with indigenous musical rhythms.
“Brazilian beats grabbed me by the drumsticks! I had never been around so many people from so many countries before — I loved it! Not to mention that I was studying with Alan Dawson and Gary Chaffee side by side with students such as Branford Marsalis, Kevin Eubanks, Jeff Watts, Steve Vai — it was great.”
By 1981 with New York beckoning, Jimmy finished his bachelor degree in music and remembers “I was so ready to get to New York that I had my car packed, finished my final tests and moved there that very day.”

Now in New York he took any kind of drumming jobs available from Irish music to Neil Diamond Impersonators to weddings. But it was in the groovy R&B scene which flourished in Harlem and Bedford-Stuyvesant’s after-hours clubs that Jimmy started to establish himself. He soon started to work with then 16 year old Teddy Riley which then paved the way to many recording and live dates with B.T Express, Evelyn Champagne King, Gladys Knight, Keith Sweat, Melba Moore, Cissy Houston and Bobby Brown.
By 1985, Daniel, having tasted the urban music front, started to spend his off time traveling and studying world music from South America,the Caribbean, Africa and anywhere the rhythms called him. Back in NYC he started collaborations with percussionist Nana Vasconcelos and Cyro Baptista, playing Brazilian rhythms with them one day and the next day playing with people like Bo Diddley, Dave Valentin, Dr John, Sam and Dave and South Side Johnny & the Asbury Jukes.
“Damn — I was a NY musician — I loved that!” laughs Daniel, “I was making a living playing with all different kinds of bands — learning different styles by doing.”
In 1992 Jimmy got the call from Neil Rodgers to work with Diana Ross which led to gigs with Aretha Franklin, David Byrne, Joan Osborne and Vanessa Williams.
By 1995 Daniel was really trying to concentrate on his love for world music he started his own project, NooVooDoo, which was a mix of religious drumming and songs from Haiti and Cuba mixed with western music. “A few years before I was doing a lot of traveling and playing with artist from all over South America and the Caribbean like Giberto Gil, Toots and the Maytals, Raul Desouza and wanted to bring some of those styles to the music I grew up with.”
Since then Jimmy can be seen and heard with a wide variety of musicians and acts such as Reginald Policard, Los Muñequitos de Matanzas, Henry Butler, Pee Wee Ellis, Cecile Mclorin-Salvant, Nestor Torres, and Boukan Ginen

At this point in his career, i think it is pretty safe to say that Jimmy Daniel has “been there, done that.”